Wasp nest removal can be highly dangerous and in nearly every instance, removing a wasp nest is something which should be left to the professionals.

As we approach the height of summer, we are well and truly entering wasp season in Galway. Here in Ireland the wasp population reaches its peak around August, leading into September. There are also few native species here in Ireland which trigger as much widespread negative sentiment, perhaps only rats reaching similar levels of distaste. Despite this, wasps do indeed need to live somewhere and unfortunately, this means that a great deal of us will come into close contact with a wasps nest at some point in our lives.

Wasps are social animals in much the same way as ants or bees and live in groups known as colonies. The population of these colonies can reach anywhere up to 10,000. However, in order to achieve these numbers, wasps must first find a suitable site to nest. Starting towards the end of Spring, wasps begin to actively seek out ideal locations to colonize. Typically, these sites come in the form garden sheds or abandoned buildings, quiet enough to avoid regular disturbance. Once the wasps have found a location suited to their needs, the building of the nest begins.

In order to build their nests, wasps chew tiny pieces of wood which then mixes with their saliva in order to form a papery, pulp like substance. Once this process has been repeated numerous times and the newly established nest has reached a suitable size, the Queen begins to lay her eggs. Over time, the size of both the colony and the nest will grow. 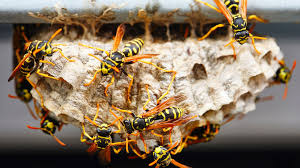 Signs of a wasp nest

If you start to notice an increasingly large wasp presence near your home or garden, chances are that you may have a wasps nest nearby. Perhaps the easiest way to confirm the presence of a wasps nest is to follow the flight path of the wasps from a safe vantage point. This should lead you straight to the nest, if indeed there is one. In this instance, you should always ensure you remain at a safe distance due to the fact that a wasps sting can be tremendously painful. As well as this, the potentially large number of wasps makes disturbing the nest even more dangerous. If you do locate a wasp nest on your premises, we strongly advise you contact a professional.

How to remove a wasp nest

Removing a wasps nest can be very dangerous. As a result, we strongly advice you seek the services of a pest control professional. Here at Galway Pest Services, we have countless years of experience in dealing with wasps and are always on hand to help you return to living a pest free life! Thankfully, once a wasp nest has been removed, the same location will not be used the following year.

In a word, yes. Attempting to remove a wasp nest can be very dangerous and is a task which should never be attempted by someone who is not a trained pest control professional. Furthermore, wasp nests can also be particularly dangerous if you have young children. If you notice a large wasps nest on your property, the safest course of action is to call the professionals.

To get in touch with our team of pest control experts here at Galway Pest Services,